Globally, ghost fishing is a significant danger to ocean habitats as well as a menace to the fisheries sub-sector. This phenomenon is increasing annually, causing mortality of a vast quantity of aquatic life. This article highlights the ecological and economic effects of ghost fishing and the possible solutions of solving this menace as individuals, government body and other agencies, but first, what is ghost fishing, interesting facts, and its principal causes?

What is ghost fishing?

Simply put, ghost fishing occurs when old fishing gears that are forsaken intentionally or lost in a marine environment get tossed around the ocean by waves, currents, and storms and “continues to fish” and in the process trapping aquatic lives and may cause possible death. Aside from entanglement and the chance of death to aquatic biota, it can destroy habitats and pose a threat to navigation. It is known as ghost gear and derelict fishing gear (DFG). However, it is technically referred to as abandoned, lost, discarded ﬁshing gear (ALDFG). 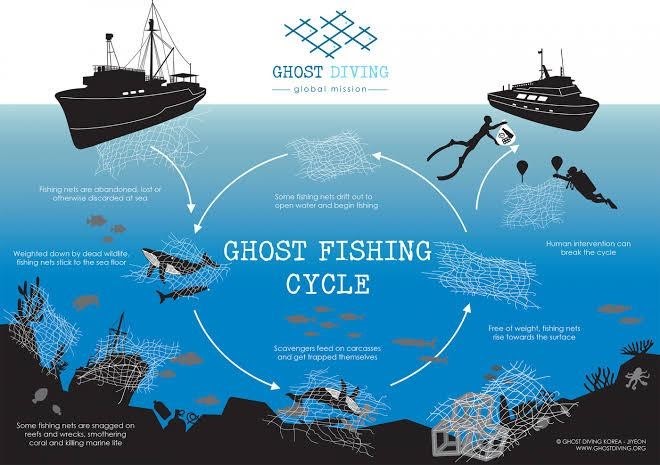 Approximately 640,000 tons of fishing gears reach the world’s oceans annually, adding up to 10 percent of all aquatic debris according to a combined report by UN Food and Agriculture Organization (FAO) and the United Nations Environment Program (UNEP) in 2009. This study also shows that this phenomenon has increased over the years due to the introduction of highly durable synthetic fishing gear employed in harvesting seafood and may account for around 50% of all plastic debris in the marine ecosystem as obtained from a recent study in 2018 by The Marine Executive.

Derelict fishing gear is attributed to several forms of fishing equipment with some causing devastating impact while others try to measure up. Likewise, some impacts are immediate while others can take years to evaluate, this depends on the fisheries. ALDFG is primarily caused by ghost nets with commercial nets the primary suspect. Commercial fishing nets including gillnet and drift net cause the most harm due to their invisibility status when hanging in the water and thereby trapping any fish a little bigger than its mesh size trying to swim through them. It is also not uncommon for old nets to be discarded overboard that ends grabbing corals and hindering seagrasses proliferation when it clogs them. It is important to note that about 30% of all fish stock harvested comes from ghost fishing nets, which is quite high.

Ghost traps and cages also contribute to ghost gear although minimal than ghost nets. The issues with traps and cages are its large-scale loss, a continuous catch of aquatic fauna with no human effort, and a longer life span underwater. For example, FAO (2009) reported the one-third loss of traps by commercial fisher folks in the Chesapeake Bay, which is approximately 150,000 crab traps annually and interestingly, for only a single bay with potentials for higher losses under unfavourable weather conditions. Back at home (Nigeria), yearly there are reports of lost traps resulting in ‘ghost fishing’, notably, during the time of floods when some of the pegs fell off or when the attachments got broken in a fleet of set traps. These lost traps are later recovered elsewhere downstream of the water body with trapped fish samples.

The third cause of derelict fishing gear is ghost fishing line especially, longline. They can be fatal for dolphins, whales, turtles, seabirds, and sharks. SeaDoc Society in California gathered around 306 km of recreational longlines around piers meant for public fishing. A quick search on YouTube on how divers remove a fishing hook from marine animals including sharks, dolphins, and others brings up hundreds of videos, one can imagine the quantity of marine life affected by hooks alone.

What is the obvious impact of ghost fishing? A quick guess is that it kills fish, however, it goes way beyond the impact to the oceans alone as it has devastating effects on the aquatic ecosystem as well as economic consequences. Ecologically, ghost fishing affects life throughout the marine environment. Principally (directly), it incapacitates and kills marine organisms when trapped or entangled and secondarily (indirectly) when these gears degrade and get ingested poison aquatic animals while also clogging their stomachs. Ghost nets are equally harmful to corals and seagrasses as they inflict physical damage as well as acting vectors of diseases on coral reefs, this is in addition to leaving polyurethane chemicals following their deterioration. World Animal Protection (2018) estimates that ghost gear causes the mortality of about 136,000 seals, sea lions, and large whales annually with inestimable values for fish, birds, turtles, and other species.

The economic consequence of ghost fishing is the most far-reaching because of the financial value of lost biodiversity. A 2010 study by SeaDoc Society estimated that a single abandoned net has the potential of killing Dungeness crabs worth $20,000 in over 10 years, this is far less expensive than recovering the same net at $1,358 only. Furthermore, NOAA in 2015 research shows that ghost traps kill about $750,000 worth of Dungeness crabs annually. The monetary value of replacing and recovering lost fishing gears is also expensive and lost traps and nets may have a hand in damaging or holding back functional traps and nets. 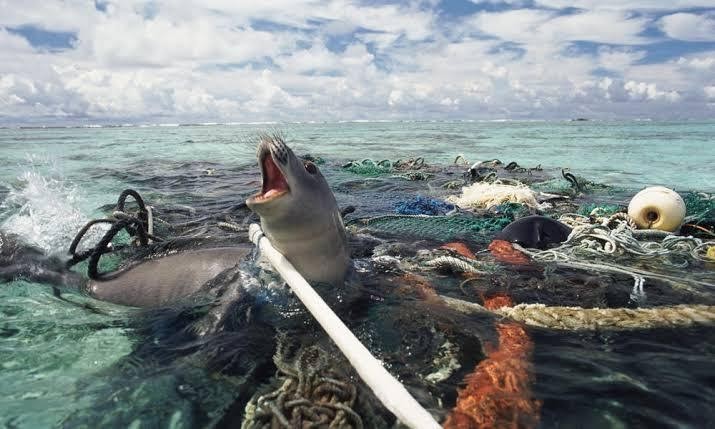 Other effects of derelict fishing gear are affecting a country’s tourism by driving away tourists due to contaminated marine environment, interfering with power stations’ capability of taking in cool water and causing damages to fish boats as it entangles propellers and snags rudders that may leave boats stranded and damaged, in extreme cases accidents may occur. Additionally, it impedes navigation when large abandon nets clog shipping lanes and waterways. 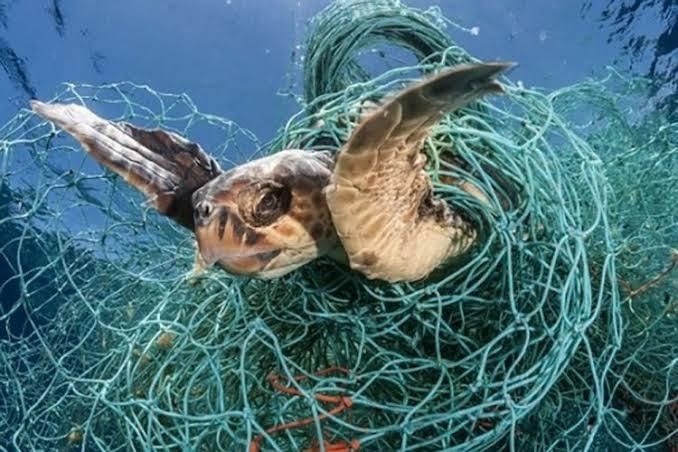 In 2016, a report by FAO identified about 17 preventive methods to avoid, minimize, or eliminate ALDFG as this problem seems it will not end anytime soon. There are several ongoing efforts by individuals, governments, and bodies in combating ghost fishing.

Now let’s discuss the way forward. As individuals, we can limit the quantity of fishing gear in the marine ecosystem by providing innovative and safer ways of discarding worn-out gear. This is possible through proper funding of these innovations and the provision of incentives to fishermen who return old fishing gear for recycling. A good example is the Fishing for the Energy project. We can also help the cause by retrieving ALDFG from the aquatic environment. Several local and international bodies (oftentimes voluntarily) have been involved with this over the years, prominent among these volunteer bodies is the Global Ghost Gear Initiative and Diveforlove. Another way to help is by reporting early enough as this aid faster clean up and less expensive spending. We should think of ways as individuals to assist the campaign against the derelict fishing gear.

The government should enact laws mandating the reporting of ALDFG as well as funding projects aimed at removing ghost gears through means that will have an indirect positive impact. Penalties obtained from fishermen caught abandoning fishing gears or not reporting lost and discarded nets/traps can put into funding ghost gear removal projects.

Agencies, organizations, Initiatives, and bodies dedicated to the cause of saving aquatic life including Global Ghost Gear Initiative, Aqualife7000, World Animal Protection, Save our Planet, National Ocean Service, World Wide Fund for Nature, International Union for the Conservation of Nature, Plastic Pollution, Coalition, etc. must continue educating the public both locally and internationally through campaigns and awareness events on the dangers of ghost fishing on vulnerable aquatic life.

Conclusively, FAO and UNEP assert that ghost fishing will probably intensify as a result of increased fishing operations, the production of long-lasting synthetic fishing gears and the lackadaisical attitude of the global community in addressing this problem, efforts must be put in place to confront this problem and give it the serious attention it deserves. The economic and ecological impact is devastating, and the onus is on us as individuals, agencies, bodies, and the government to see this not come to fruition and that these innocent lives below water are properly catered for. They all play a huge role in the balancing of the aquatic ecosystem.

We would love to hear from you, the activities, projects, and campaigns you have been involved with in this movement, or those you have witnessed. Tell us if you’ve got suggestions to combat this menace.

Hey! Do you know that plastic productions, as valu

Have you heard of the Asian Sheepshead wrasse befo

Hey! Do you know that plastic productions, as valu

Monday is here again, send in your answers 😉